Congratulations to Our June Employees of the Month! 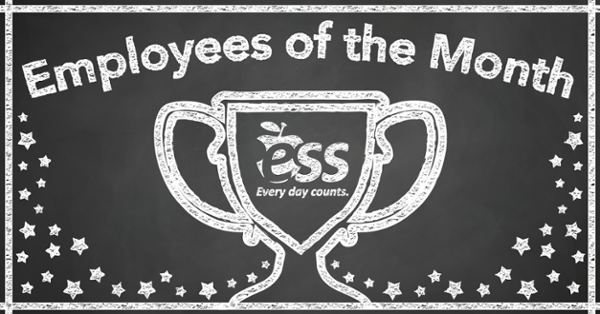 Each month, our partner school districts submit glowing reviews of our employees, from which we select four employees of the month. We’re pleased to recognize our honorees from June 2019!

Joining ESS in January 2019, Marva has worked 91 assignments for the San Lorenzo School District. She proves to be an extremely flexible substitute who is willing to work at a wide variety of different schools, including Lorenzo Manor Elementary, Bay Elementary, Bohannon Middle School, Hillside Elementary, and many more!

She was nominated by ESS District Manager Cathy Robart, who wrote, “Marva drives 2 hours to get to work each day and is flexible in her daily assignments. She is a long-time favorite of many teachers and is in high demand.”

Pam has served as a loyal ESS substitute since 2015. She’s worked 481 assignments through the Riverview Intermediate Unit #6, spending most of her time this year at the Clarion Elementaty School.

She was nominated by Special Education Supervisor Kristen Wolfe, who wrote, “Pam has been an asset to the programming we run at the IU6. She has not only supported the students and staff in the classroom she was assigned to all year, but also has been flexible in accepting alternate positions at the last minute when we had no other options for coverage. Other supervisors have been appreciative of Pam’s assistance as well. Pam deserves a commendation for her dedication and flexibility!”

Barbara was nominated by Davisville Academy School Clerk Rosemarie Florenz, who wrote, “Barbara was with us all year, starting as a long-term sub in grades 3-5, and later filling various teaching and clerk positions within many different schools and offices. She even volunteered to help out with caring for our chickens! Barbara is dependable, personable, has a great sense of humor and wants to be here at Davisville Academy!  She makes positive connections with our students and staff, is proactive and is always willing to help out wherever needed.  We are happy that she is scheduled to be our building sub next school year!”

She was nominated by Jennifer Stark, Coordinator of Early Learning Programs, who wrote, “Ms. Addison was brought to us as an occasional substitute for our Early Learning Center (child care center), licensed by DSS. We were in need of a long-term sub, but she was apprehensive at first, not wanting to work so much. Then said she’d ‘try it out.’ Ms. Addison is aware of the policies/rules, and is reliable and accountable. She’s also very skilled and competent in the classroom, and is passionate about taking care of the children by providing the highest quality of care. When she was issued a school t-shirt, she said, “Now I feel like part of the team”! What started out as an occasional sub position has evolved into a definite team member and asset of Freedman Early Learning Center. We are looking forward to her returning next school year!”

Congratulations and keep up the excellent work!

Whether you’re an applicant looking for a job opportunity, a district administrator seeking an educational staffing specialist, or anyone with a general inquiry, we want to hear from you. Contact Us Today